This was the day when our company Code Rush decided to treat us to a movie date with our colleagues.

I still remember how Srijana, Ashna, and I couldn’t hold our excitement. First of all, it was Friday and second, we didn’t have to work that day. After everyone reached the office we headed out to Labim mall. It was a 12 pm show and our dearest Astha dd and Aavas dai had already booked the tickets. We reached the hall and the first thing we saw were large bottles of sanitizers everywhere. I think I used sanitizer from each bottle there to satisfy my obsession with sanitizers.

The movie was about to start but first I went to the washroom with Ashna and Srijana not because I had to go but because I wanted to take that mirror selfie thing with them. Thanks to that, I have a lot of pictures with them from that day. I didn’t post any of them tho, maybe they weren’t insta worthy. 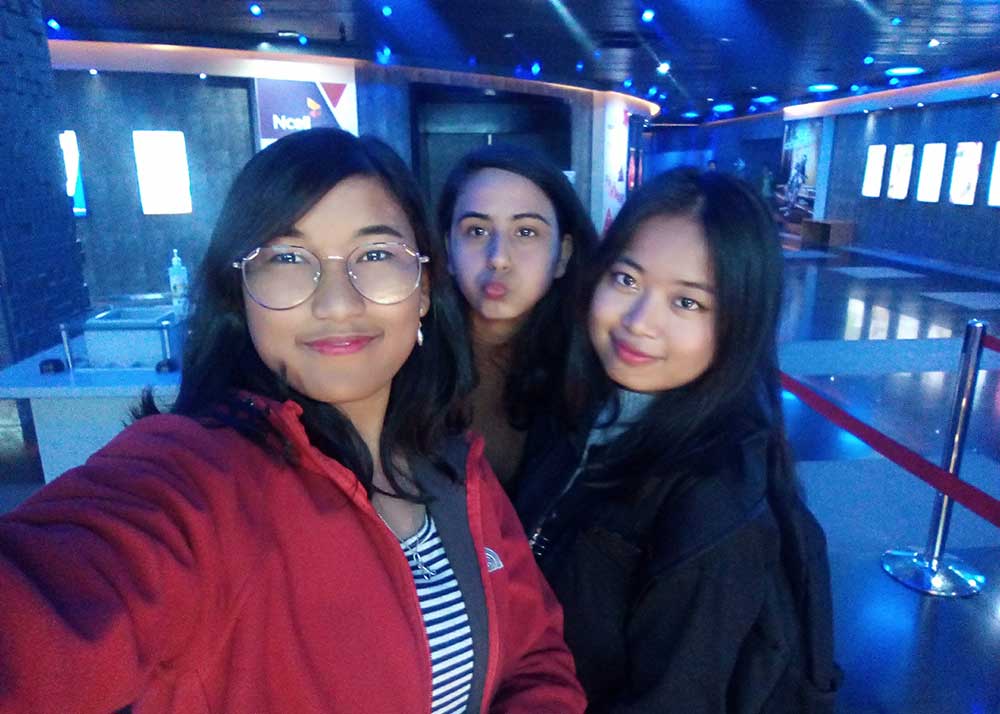 Then we entered the hall, took our seat like good girls, and started munching on popcorn before the movie even started. Astha dd had a regular popcorn while Ashna, Srijana, Aavas dai and me being a cheese freak had cheese popcorn. Oh, yeah I haven’t mentioned what movie we were going to watch, it was this Indian movie “Thappad”. The movie started and silence took over. In the interval, we again took some snaps which are basic while going out. At the end of the movie, there was an emotional scene and I could clearly hear Srijana snuffling.

The movie was somewhat ok for me. There was Srijana who cried because the movie was too good and another Ashna who didn’t understand the movie. Well, different people have different perceptions.

We all were hungry after the movie so we went to restaurant hunting. Our dai was craving for momos and so was I. Astha dd recommended one restaurant but Avash dai hesitated. Can you guess why? It’s because they had their banner board worn out and old. I repeat “THE BANNER BOARD WAS WORN OUT AND OLD”. Anyway, we went to another place(where the banner wasn’t old). We ordered plenty of different things. We enjoyed food with an extra masala of Avas dai’s jokes. I don’t remember the joke. There, we had a great time with great people and great food.

Delighted and full we all returned back to our office. There was plenty of time left but no one had the mood to work. So we decided on ending the day with Samrajya (Samrajya is a board game similar to snakes and ladders). Specially Aavas dai always wins this game (because he likes to cheat). All 5 of us played this game with a sharp eye on Aavas dai. I am sorry to break this but Astha dd is kind of a noob in this game and about Srijana, she never has luck on this game. Basically, only Aavas dai, Ashna, and I were the winners throughout the whole game that day.